In my line of work I frequently get presented with unusual challenges and this was just the case recently when I was asked to restore an AB Chase stand up organ. Built in 1892 it's fair to say  this organ had seen better days! The original finish had been painted over by an ambitious owner about 40 years ago and had for the past decade resided in an unheated basement. This is what I found when I arrived in the ​s​cene!

Between the mildew, failed finishes and stain leeching, not to mention the structural and mechanical issues!. I had my work cut out for me! I was lucky to have on staff an experienced piano/organ tuner! (Tom Howard what would I do with out you!) and together we dismantled and meticulously stripped every inch until we had removed each finish including the original stain,revealing a beautiful solid walnut. 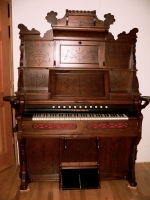 I chose a medium walnut stain which enhanced the color and highlighted the woodgrain.

Several coats of nitrocellulose lacquer later this it the result! 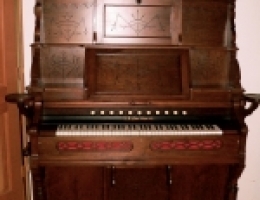